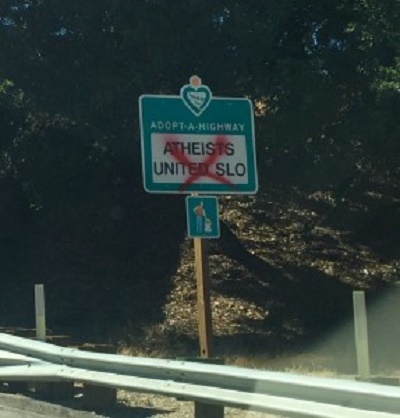 Our California CoRs have seen their fair share of vandalism, when it comes to road signs or billboards. Late last August, Butte County Coalition of Reason experienced more vandalism for the third consecutive year. This time, nearly 400 miles south of Chico, a vandal spray painted over part of an Atheists United Adopt-a-Highway road sign, southbound on Highway 101, near Atascadero. The vandalism was discovered Saturday, September 19 by members of Atheists United San Luis Obispo (AU SLO), a member of the Central Coast Coalition of Reason, which was launched during the first week of May 2015.

“This shows loud and clear just how necessary our group is,” said Steve Arkowitz, Coordinator of the Central Coast Coalition of Reason. “Whenever an atheist is public about her or his identity, there are others who will seek to impose and proselytize their opposing views. This is why our group seeks to offer a safe space for freedom of conscience.”

“AU SLO stands for reason, compassion, and tolerance for all people,” said Arkowitz. “The highway sign is a symbol of the positive work we are dedicated to performing in our local community for the benefit of citizens of all sincerely-held beliefs.”

When we visited Central Coast Coalition of Reason in May for their week-long launch activities, we discovered a friendly group of people, whose social work in their local community was well-respected. At the same time, alongside their social outreach, members of the Central Coast CoR made their voices heard when they united in disapproval regarding a science teacher who featured creationism in their classroom, despite ISD (independent school district) regulations. AU SLO has also been instrumental in helping to eliminate non-inclusive prayers at city council meetings.

Central Coast CoR’s actions consistently demonstrate that there is a time and a place for everything. Surely, some people who would criticize Central Coast CoR’s groups for raising concerns in the public schools and local city councils would also be among those who would be grateful for the contributions the group made for the beautification of public roads that people of all sincerely-held beliefs would enjoy. The time and the place for disagreement and discussion is not through surreptitious means, but it should be done in public where everyone has an opportunity to represent themselves and their ideas. It certainly isn’t appropriate to express disapproval through the unwarranted and unnecessary destruction of public property, such as road signs.

If your local CoR and its cooperating groups are victim to destruction of property, please reach out to UnitedCoR for assistance in how to handle your press releases and public statements.