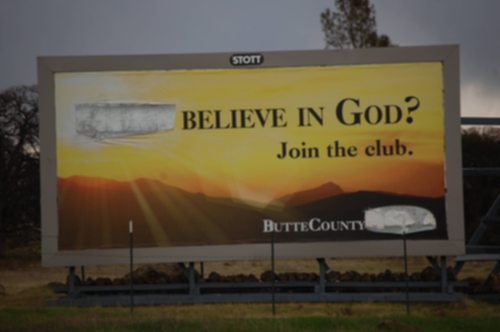 CHICO, Calif. – A dozen billboards went up around Chico on Dec. 5 carrying the following message: "Don’t believe in God? Join the club."

The billboards, part of a national campaign, marked the formal launch of the Butte County Coalition of Reason.

By Wednesday morning, someone had defaced one of them, ripping off "Don’t" and the group’s website, and leaving the words "believe in God? Join the club."

"The vandalism of one of our signs clearly demonstrates the hypocrisy of the religionists that they claim to love everyone," said coalition coordinator George Gold. "It’s a lie. They only accept you if you believe what they believe."

The billboards were intended to notify atheists, agnostics and other like-minded thinkers they are not alone, Gold said. He has received about 50 emails since the billboards went up, and he said 96 percent have been "supportive and, in fact, thankful."

"What’s the controversy? No one is forcing you to look," he said. "The billboards are not targeted at religionists."

The national United Coalition of Reason provided the $3,780 in funding for the Chico ads. They are scheduled to be up for a month. Since 2009, 58 similar billboard campaigns have been launched in 33 states and the District of Columbia.

The vandalism surprised Leslie Johnson, secretary of the Chico Chapter of the American Civil Liberties Union. Chico is normally a tolerant community, and the defacing is unfortunate, she said.

It doesn’t win any converts to their positions," she said. "What America stands for is freedom of thought and freedom of religion, and I think has to include freedom to be an unbeliever."

Magalia resident Norma Allen paused to question her memory when she spotted the billboard’s altered message and was then irritated to realize it had been vandalized.

"I think it’s ridiculous that people tear down other people’s signs, period," said. "Whether it’s a religious group or an atheist group, they have paid for them."

As of Wednesday afternoon, Gold did not know the timeline or cost for repairs, or who was responsible for the expense.

Stott Outdoor Advertising, which operates the billboards, could not be reached for comment.