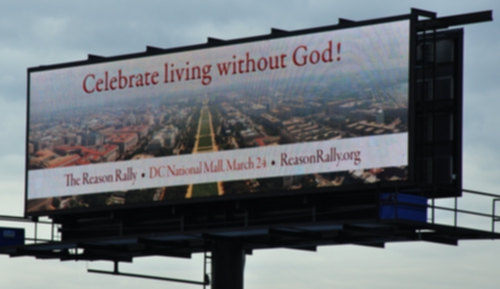 These words, superimposed over an image of the National Mall in Washington DC, now appear on five billboards blanketing Baltimore, Maryland, and one prominent billboard in Richmond, Virginia.

The ads announce the upcoming Reason Rally, a celebratory gathering of atheists, agnostics, humanists and skeptics. The rally features a lineup of prominent nonreligious speakers and entertainers, including scientist Richard Dawkins, musician and comedian Tim Minchin, "Mythbusters" Co-host Adam Savage, magician James Randi, high school activist Jessica Ahlquist, novelist Taslima Nasrin and the band Bad Religion. Comedian Paul Provenza will be a master of ceremonies. The free, public event is the combined effort of all the major national organizations in the secular movement and will run from 10:00 AM to 6:00 PM, March 24, on the National Mall.

"This will be a glorious gathering of the godless," said David Silverman, president of the Reason Rally Coalition. "Thousands of us will be coming together to celebrate secular values and reason-and we’re going to have a great time doing it."

As with any event taking place in Washington DC, there are social and political angles at play. The Reason Rally website states that the rally intends to "unify, energize and embolden secular people nationwide." Local secular communities are answering the call.

"We’re converging on Washington to take our seat at the table," added Emil Volcheck, lead organizer of the Baltimore Coalition of Reason. "Our rightful place at the table," emphasized Virginia freethought organizer Shelley Mountjoy. "The godless won’t be voiceless," both agreed, referring to the millions of sympathetic Marylanders and Virginians, who they look to and encourage to join in.

In addition, Volcheck will speak about the rally this Thursday, March 15, at "Ignite Baltimore" in MICA’s Brown Center.

The five billboard locations in Baltimore are as follows:

The Richmond billboard greets westbound traffic on I-64 just before the Staples Mill Road turnoff. The billboard is on the right-hand side.