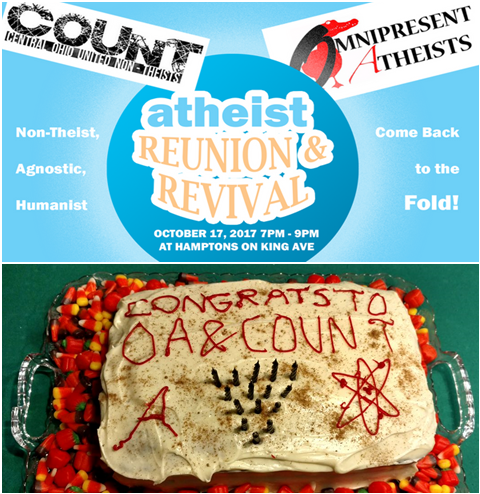 COUNT and OA are members of the Columbus Coalition of Reason (CoR). They have worked together on many projects including tabling at a local community festival (COMFEST) and other fundraisers for the Mid-Ohio Foodbank. Members of both groups will help with the sixth annual Flying Spaghetti Monster (FSM) Benefit Dinner on November 9th. 76 volunteers have attended the joint COUNT and Humanist Community of Central Ohio (HCCO) Van Buren Drive shelter events held on 2nd Tuesdays each month. Members of the Secular Student Alliance (SSA) at The Ohio State University (OSU) have also helped serve meals there. OA has welcomed shelter volunteers for dinner/drinks following 34 shelter events held since 2015. COUNT expanded HCCO’s Bleed-N-Feed Red Cross blood donation events and invited all Columbus CoR groups to participate. In 2017, 10 volunteers spent 34 hours donating 29 units.

More than 35 people from Columbus CoR groups attended the ARR and helped OA celebrate reaching 949 members, their homeless shelter event support and working the most volunteer hours (80) of any Columbus CoR group at COMFEST 2017.

COUNT celebrated exceeding 500 members and 1,000 hours worked at the Columbus Ronald McDonald House by 19 volunteers since 2013, Beyond Belief Network 2017 Gold/level 1 status, four 2017 Day of Reason proclamation requests (one of which prompted an Upper Arlington City Council secular invocation), over 700 hours worked (with HCCO and SSA at OSU) at the Van Buren Drive shelter and Bleed-N-Feed results.

Although the ARR was primarily a celebration of anniversaries and milestones, we collected $30 and 20 lbs of food for the Mid-Ohio Foodbank bringing the total raised in Columbus CoR events to $11,406.37 and 1,530 lbs of food.

COUNT, OA, HCCO, and SSA at OSU are members of the Columbus Coalition of Reason.