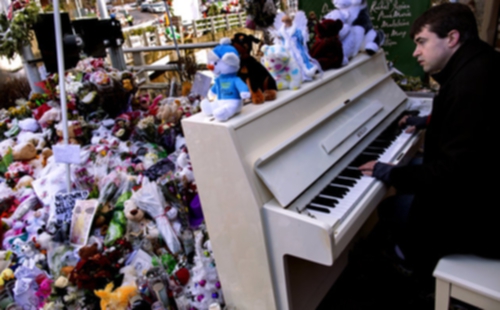 All that was needed to make the national tragedy of the killing of 20 children and 6 adults into an anti-God kick in Jesus’ teeth fest was for the usual suspects who hate Jesus to step up to defame His Name again. Of course I’m talking about the "Christian" leaders who can be counted on to drag the name of Christ through the mud at every profitable fundraising importunity. Christian leaders say that the massacre at Sandy Hook Elementary School in Newtown, Connecticut was the result of our national falling away from fundamentalist Protestant gullibility.

The idiots — religious village idiots that is — are at it again. I thought Dobson was dead but I guess not. He’s just retired. He’s still alive enough to act like the zombie-for-Jesus’-younger-dumber-brother he is.(I went on his show 3 times back in the day when I too was part of the religious idiots club.) Bryan Fischer, the American Family Association hate host talk-show host, and Franklin-sell-my-soul-to-the-Mormos-because -I-hate-Obama-so-much-Graham (of course), the president and CEO of the tax-exempt Billy Graham Evangelistic Association was not to be outdone.

Dobson commented while speaking to listeners of his Dr. James Dobson’s Family Talk program: “I mean millions of people have decided that God doesn’t exist… And a lot of these things are happening around us, and somebody is going to get mad at me for saying what I am about to say right now, but I am going to give you my honest opinion: I think we have turned our back on the scripture and on God almighty and I think he has allowed [this Newtown massacre] judgment to fall upon us. I think that’s what’s going on.”

Bryan Fischer of the American family Association said the victims at Sandy Hook had lost God’s protection because prayer has been prohibited from schools. “The question is going to come up, where was God?,” Fischer said. “I thought God cared about the little children. God protects the little children. Where was God when all this went down. Here’s the bottom line, God is not going to go where he is not wanted… Now we have spent since 1962 — we’re 50 years into this now–we have spent 50 years telling God to get lost, telling God we do not want you in our schools, we don’t want to pray to you in our schools, we do not want to pray to your before football games, we don’t want to pray to you at graduations, we don’t want anybody talking about you in a graduation speech… In 1962 we kicked prayer out of the schools. In 1963 we kicked God’s word out of ours schools. In 1980 we kicked the Ten Commandments out of our schools. We’ve kicked God out of our public school system. And I think God would say to us, ‘Hey, I’ll be glad to protect your children, but you’ve got to invite me back into your world first. I’m not going to go where I’m not wanted. I am a gentlemen.”

Franklin Graham wrote a "response" to the Newtown Massacre and did not mention the word gun.

Graham said more or less blamed the mdia and president Obama in a round about way: “’The heart is deceitful above all things, and desperately wicked.’ He continued: “In fact, the Bible gives clear testimony to just how evil the human race became. ‘The Lord saw that the wickedness of man was great in the earth, and that every intent of the thoughts of his heart was only evil continually. And the Lord ‘was grieved in His heart’ (Gen. 6:5-6)."Where do we go from here? We might start by looking at what we watch and listen to." Graham — who has called President Obama a Muslim and not Christian at times — then took a cheap shot saying: “For example, South Korean rapper sensation Psy, who has gained worldwide acclaim by singing that Americans should be killed ‘slowly and painfully,’ including, ‘daughters, mothers, daughters-in-law and fathers’ was featured last weekend at ‘Christmas in Washington,’ a charity concert attended by President Obama. Parents and children are feeding on entertainment that portrays violence whether through lewd television programs, violent movies, offensive music, vulgar video games and anything- goes Internet gaming sites.”