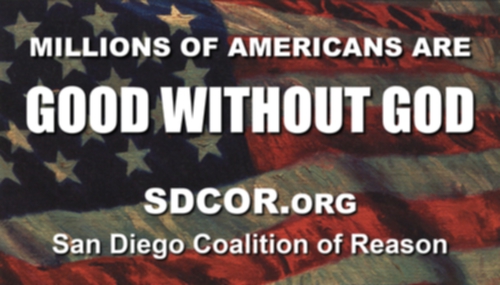 As Americans head for vacation spots or fire up their backyard grills this weekend to celebrate Independence Day, they will be seeing more than fireworks when they look up.

Planes trailing banners will be flying throughout the nation with messages like:

"The purpose of the banners is to highlight the fact that atheists are everywhere, in every parade, on every beach, and in every state, city, and town," said Dave Silverman, President of American Atheists. "Atheism is alive and growing in the U.S. "

"Over 45 million Americans profess ‘no religion’ according to studies like the American Religion Identification Survey,"
Silverman added. "Many of us use terms like atheist, freethinker, secularist, or humanist to describe our philosophy; and most of us agree on the necessity to separate church, and State."

Blair Scott, Communications Director for the group, says that planes will be flying the banners in 26 states. "Our goal was
to have this promotion in all fifty states, but some airplane advertisers declined."

Still, said Scott, the airplane banners are "the next step" in a campaign which has included a series of controversial billboards , including one last December erected at the entrance to New York’s iconic Lincoln Tunnel.

Congress shall make no law respecting an establishment of religion, or prohibiting the free exercise thereof.. (Article 1 of the Bill of Rights)

The Government of the United States is not in any sense founded in the Christian Religion (Treaty of Tripoli, under order of George Washington and signed into law by John Adams, 1797)

I am the Lord thy God. Thou shalt have no other gods before me. (Commandment 1, Old Testament)

NOT in the Bible:  Democracy, Balance of Power (checks and balances), Trial by Jury, Habeas Corpus, Due Process, Freedom of Religion, Freedom of the Press,  Right to Education, Equality of the Genders,  and many other "American" characteristics — How can anyone allege we are a Christian Nation if everything special about us is not IN the Bible?

I am a patriot, and I am proud of my patriotism (defined as consistent loyalty of country, including questioning our policies) . I support our troops (even if not always the foreign policy they’re executing), cherish our rights, and respect our responsibilities, including the responsibility to protect our country from those who would betray our freedoms in support of their own agendas.

Despite what the Religious Right would like you to think, the founders specifically made the USA secular by design. They did not “forget” to place Jesus or God in the Constitution; rather they discussed it fervently and decided against it (a matter of record). They penned the Bill of Rights based on ethical values, not religious dogma. They enacted the Treaty of Tripoli, unanimously, which states specifically that the USA is not founded in Christianity. They clearly intended the government to stay out of the religion business.

Religion, however, being inherently weak in premise, needs the state to endorse it in order to thrive. It requires the legitimacy only the government can provide in order to survive, so it lobbies the politicians to push a revisionist history that directly conflicts with provable fact, all toward the end of state support in the form of endorsement, tax breaks, and special privileges. In support of their efforts to entwine themselves with the government, they quote-mine the founders, picking out pieces that fit their agenda and contending that what they can find is incontrovertible, even when the rest of the facts disagree. They treat founder quotes like they treat Bible quotes – to suit their intentions.

Our Constitution requires the government to protect freedom of religion — this is the exact opposite of what religion wants. Religion does not want you free, it wants you obedient. Religion never OK’s diversity or dissent. Freedom of Religion is absent in the Old Testament, New Testament, and Koran, because freedom leads to discussion and criticism, which often leads to research, education, and often, atheism. Therefore, religion is by its very nature counter to the Constitution in a very fundamental way.

Since Patriotism is loyalty to one’s country, which is much more about its laws than its geography, religion is at its core unpatriotic to the American Way. Atheism, therefore, being the absence of religion and supportive (at least not unsupportive) of the Freedom of Religion, is patriotic by default, and perfectly so.

To be clear, atheism, being simply nothing more than the absence of religion, does not have an American component. You can, after all, be an atheist who hates America. The ironic thing is that even the freedom to hate America is American in and of itself. You are free to disagree all you like in this country, which is the exact opposite of what you’ll get from religion. This isn’t about atheists, it’s about atheism, and like it or not, it’s the only theological position that is directly aligned with American freedom.

In celebration of the rise of atheism in America, American Atheists is flying aerial banners across the country this 4th of July. Proudly stating “God-LESS America” and “Atheism is patriotic”, our banners will bring the breadth and patriotism of the movement into America’s conversation. Originally, we had planned on flying banners in all fifty states, representing the fact that atheism is the fastest growing segment in all fifty states, but we were unable to find pilots in many states willing to fly our banners, representing a clear reminder of the work we have to do.

As the movement expands throughout the next few years, we can expect more attempts by the religious Right to minimize our rights with false patriotism and cafeteria quotes. But if we were indeed a Christian Nation, we would never have a chance for success, because we would not have the right to fight. The fact that we exist is the best evidence that we’re correct, and that America is truly free. Defending this freedom is why we’re here in the first place.