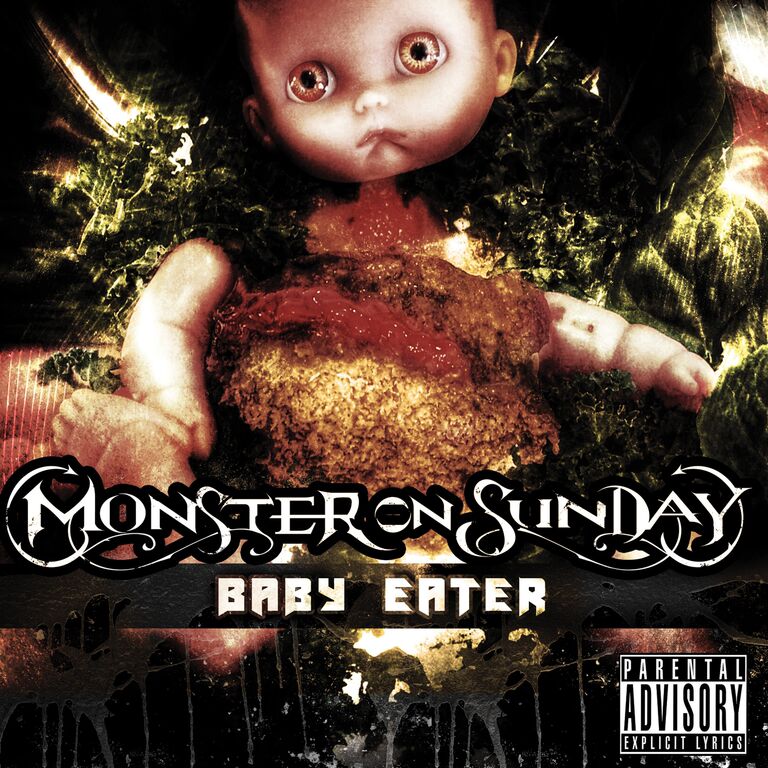 This hot atheist band refuses to let any deity have the best tunes! After delivering some heavy sounds to San Diego’s first Godless Gala, Monster on Sunday is set to take their message of no longer looking in the clouds for divine intervention, but seeing our feet on the ground, living life through reason and facts—guaranteed to frighten the clergy!

The album begins with roasting feedback from Steve Cass’ Stratocaster, leading into the hot sounds of lead singer Tally Cass in “Baby Eater,” reflecting the album’s name and evocative artwork. Their heavy sounds are supported with power and precision from Brian Baker on the drums and seriously-hot riffs delivered by bassist James Cass on a Spekter. The hard-hitting electricity doesn’t let up throughout the song, keeping the listener plugged-in for every electrifying second.

“Stardust” changes the mood of the album, slowing down to combine the serenity of a ballad with the steady, slow rhythms of a rock shuffle. The sultry sounds of Adele singing the theme for the James Bond film Skyfall can be heard in lead singer Tally Cass’s lyrical reminder that we are created from stardust and that we are remade over again through Newtonian processes rather than a mythical rebirth in an afterlife.

“Make a Believer” invokes the memory of comedian George Carlin whose joke about the wrathful punishment of a god “…but he loves you” in the lyrics exposes theological inconsistencies of the “Jesus who loves me” despite a god who “is sending me to hell.” The band angrily demands a reason to justify the existence of god by distilling belief in god as “a good hallucination.”

“Just Like You” calls into question the hyprocrisy of those who are on the “right” when they accuse their god as being a “bloodthirsty hypocrite,” “misogynistic homophobic racist” and a “malevolent bully.” This echoes the condemnation of hyper-Calvinistic theology that lies at the heart of those who believe that they have the right to tell others they are “right.” The rhythms create a sense of urgency to reflect on our current American society and its members who are often seen as filthy rags and depraved sinners by those who aren’t afraid to judge “unless ye be judged.”

“Pain” reverts back to the savvy mixture of a slow rock shuffle and ballad with juiced-up riffs to illustrate the pain of a person who prays to have pain and suffering taken from them, only to fall deeper into despair as they struggle with the classic theodicy question: “Why would bad things happen to good people?” The masterfully-executed riff compliments and defines the singer’s painful recognition that her hurt is more real than the figment in which she had originally trusted.

“Christian Terrorist” injects the driving beats of a supercharged Iron Maiden to drive home the accusation of a message of love and acceptance that has been transformed into an organized religion where some fall into the trap of being theocratic zealots who condemn disagreement. Monster on Sunday highlights theocratic self-righteousness through exposing its unwilling adherents who persecute people who have evolved alongside progressive views of philosophy and science.

Other tracks included in the album are “Make a Believer,” “Monster On Sunday,” and “Believe In Yourself,” as well as a salute to one of rock’s greatest bands–Black Sabbath–with a cover of their song, “God Is Dead.” Monster On Sunday’s sounds sizzle from the 4×12 Marshall 1960 cabinet with vintage 75s that sends the sound of Steve’s Stratocaster beyond the stratosphere when he’s not playing a Gibson SG. Enough stompboxes were used to fill the back of a bus, making this album a must to listen to, crank up, and annoy your self-righteous friends and neighbors.

Recommended if you like:
Alice in Chains, Black Sabbath, Bad Religion, Iron Maiden