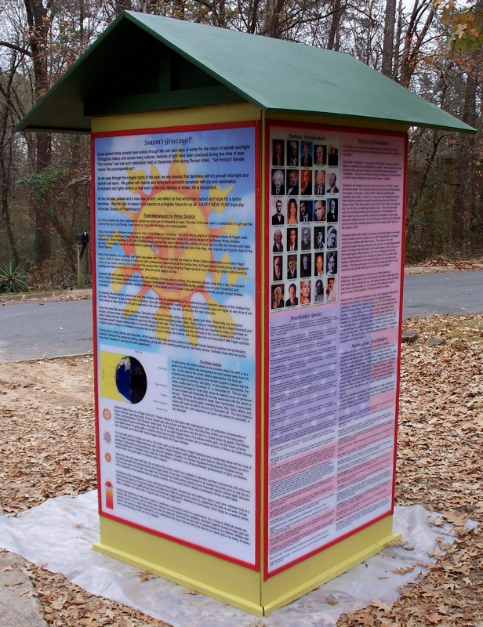 LITTLE ROCK, AR –The ACLU of Arkansas filed a federal lawsuit today charging Arkansas Secretary ofState Charlie Daniels with violating the free speech rights of The Arkansas Society of Freethinkers by barring them from erecting a temporary Winter Solstice display on the grounds of the state Capitol. An application by the Freethinkers to erect a display was rejected despite the fact that the proposed display meets the requirements of the state capitol display policy and despite the presence of another display on the grounds.

The ACLU lawsuit asks the U.S. District Court for the Eastern District of Arkansas to order Daniels to grant the Freethinkers permission to put up their display.

In 1993 the Arkansas Secretary of State adopted a policy for “Temporary Displays on State Capitol Grounds.” The policy set up a system whereby any person or group could put up a temporary display by meeting certain requirements, including sturdiness and non-interference with pedestrian traffic. The Freethinkers’ proposed display met the guidelines of the policy, but was rejected.

“It’s clear that the only reason the Freethinkers’ application has been turned down is that the Secretary of State doesn’t like the message of the display,” said Rita Sklar, Executive Director of the ACLU of Arkansas. “The Secretary of State didn’t have to allow anyone to put up a display on the Capitol grounds, but when the Office adopted the temporary display policy it set up a public forum where anyone with any message could install a display if they followed the policy.”

The Arkansas Society of Freethinkers is a statewide non-profit organization in part dedicated to promoting education and awareness of Freethinkers, their history, activities and holidays. The group filed a written application to put up a display October 16, describing the meaning and history of the Winter Solstice holiday. The Secretary of State rejected the application in November, citing an Arkansas statute that provides authority to the state capitol police to maintain “proper order and decorum.” On further inquiry, the Secretary of State’s office asserted that the proposed display did not have the proper “tone.” Later, the office added that a Winter Solstice display would not be consistent with the other displays and decorations at the Capitol.

According to court papers filed by the ACLU, the only other temporary display on state capitol grounds is “a crèche with a wood exterior and nativity figures carved out of wood. The display is notdecorated with lights or ornamentation of any kind and is devoid of a festive tone.”

When the ACLU submitted a Freedom of Information Act request for the file on the 16-year-old policy for the past 10 years, the only documents provided were the applications filed the past two years by the Freethinkers, the denials of these applications and the policy listing the requirements that must be met in order to erect a temporary display. There were no applications or permits related to the other display.

ACLU attorneys met with representatives of the Secretary of State’s office to request clarification of the reasons the Freethinkers’ display was turned down, and to ask how the other display was put up every year without any apparent documentation. When they received no answer, the ACLU lawyers informed Secretary of State officials that denying the Freethinkers permission to erect their display was unconstitutional and that litigation was likely.

"Our goal is to be included in the holiday season, which we think is big enough to accommodate everyone," said Bill Parker, an Arkansas Society of Freethinkers officer. "All we want is to be treated fairly, and have the same access to express ourselves on public grounds that other groups have."

In court papers the ACLU says that the Secretary of State is preventing the Freethinkers Society “from exercising its First Amendment rights,” and that they “suffer, and will continue to suffer, irreparable harm” if the society is “not permitted to install its display on the state capitol grounds as soon as possible.”

The ACLU complaint further states that the Secretary of State’s action “violated the First and Fourteenth Amendments because it conditions access to the designated public forum” on his “personal acceptance of content and viewpoint […of…] constitutionally protected speech.”