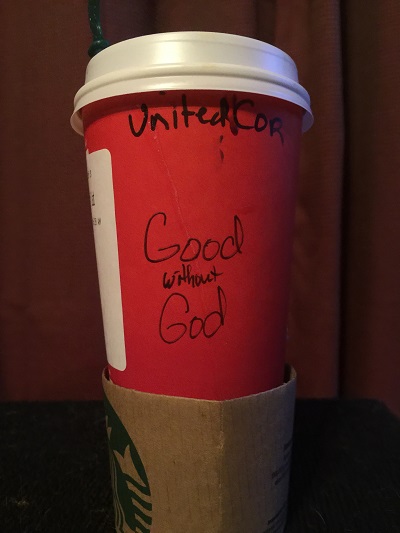 There is a war on Christmas, or so many of the religious right would like to believe.  It started with a cup, a simple red ombré design meant as a blank canvas.  Starbucks managers have taken notice that people enjoy doodling on their cups, so they presented a festive red canvas to set the stage for their patrons to unleash their imaginations.

What a brilliant idea… until a few people began proclaiming that this must be a religious statement.  A ban on symbols that many people have associated with Christmas:  snowflakes, reindeer, Santa…maybe an elf?  Does the lack of holiday paraphernalia on a simple cup imply that there is any kind of attack?  No.  It’s a blank canvas, with a little ingenuity one could pack as much holiday symbolism as they wish onto that paper cup, but no it’s much easier to make false claims.  Enjoy the hilarity that the outcry over a paper cup has attracted national attention and become a trending topic in media.  This is the epitome of what some people would call “first world problems”.

“In the past, we have told stories with our holiday cups designs,” said Jeffrey Fields, VP of Starbucks Design and Content. “This year we wanted to usher in the holidays with a purity of design that welcomes all of our stories.”

In a video posted onto Facebook, Josh Feuerstein, proclaimed that Starbucks

employees are not allowed to use the phrase, “Merry Christmas.”  In an email, a Starbucks spokesperson said that the company’s baristas “are not provided a script or a policy around greeting customers. They are simply encouraged to create a welcoming environment to delight each person who walks through our doors.”

So, no, Starbucks employees are not banned from saying “Merry Christmas” to customers.  An interesting note, Feuerstein claimed in the video that he ordered coffee; upon editing a screen grab of the video it was noted that judging from the tags he was drinking tea.  An arbitrary detail to lie about, is it not?  Then again, some Evangelicals are no strangers to spreading news that cannot be proven.

Bristol Palin weighed in by saying, “Do not buy in to the media hype surrounding this story!!  It is just another attempt by the LEFT to make Christians look stupid.”   No, it appears that a story started by an Evangelical, perpetuated by others in the religious right is causing all of the noise.

Stephen Colbert offered his spin saying, “Yes, they got rid of the Christian religious symbols like snowflakes and snowmen,” Colbert said. “I think we all remember the story of when baby Jesus was visited by the three wise Frosties.”

So the holiday season has officially begun, the best that one can do is enjoy the spectacle.  Odds are, there is plenty more where that came from.  We do not need a season to spread happiness and cheer.  Fellow free thinkers, we continue being good without god all year round.