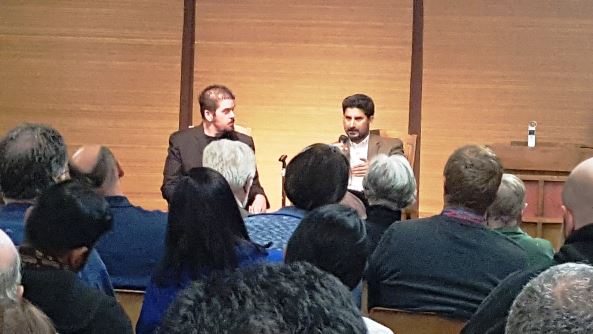 You had to have known Professor Kenneth Cracknell to really understand and appreciate his way of thinking. Like many other students those many years ago at Brite Divinity School, I sat in Cracknell’s “Ecumenism, Mission and Interfaith Dialogue” course, not knowing what to expect from a British Methodist. After all, although Brite was unapologetically Christian, it still had local rabbis teach the Hebrew Bible courses. When it offered the first Christian theology from gay and lesbian perspectives, it set itself apart from other institutions in the city. I also felt that I had an advantage over some of my classmates who had graduated from “hard-line” universities, in that the World Religions (not “comparative” religion) courses I took in undergraduate were taught by the Chair of Philosophy, and his approach to relations with people who are different was warm and welcoming.

It was when I was studying in undergraduate that I was exposed to the philosophy of Paul J. Tillich, whose ideas shape my approaches to working with people who often disagree with my sincerely-held beliefs and ideas. Tillich is recognized for his often-misquoted phrase “The first duty of love is to listen.” Instead of running with a misquoted meme, let’s see Tillich’s ideas in context: “In none of them does love do more than justice demands, but in each of them love recognizes what justice demands. In order to know what is just in a person-to-person encounter, love listens. It is its first task to listen. No human relation, especially no intimate one, is possible without mutual listening. Reproaches, reactions, defenses may be justified in terms of proportional justice. But perhaps they would prove to be unjust if there were more mutual listening. All things and all people, so to speak, call on us with small or loud voices. They want us to listen, they want us to understand their intrinsic claims, their justice of being. They want justice from us. But we can give it to them only through the love which listens.” —Love, Power, and Justice

When I was invited by the Humanists of West Suburban Chicagoland to represent Chicago CoR at an inter-religious dialogue event last week, I jumped at the opportunity, since there has been an increase of non-theistic participation in dialogue such as in California and recently in Linn County, Iowa. The event couldn’t have been more timely with people stirring up fear and frenzy by claiming that “Islamic males are kinda walking down the main streets in some of our cities and they are simply intimidating Americans” (which begs the questions, what if they are American Muslims, or did this radio presenter make the fatuous assumption that American=Christian?). Also, Dr. Herb Silverman—founder and president of the Secular Coalition for America—wrote a compelling piece in the Huffington Post, demonstrating that the majority of Americans seem to express indifference with religious freedom when it comes to extending it to non-theistic and Muslim communities. Silverman also called on non-theistic communities to not fall into the trap of viewing all adherents to a sincerely-held belief as a monolith.

I couldn’t have wished for a more talented group of people to work with that evening. The co-presenter in the event was Dr. Azam Nizamuddin, a practicing lawyer and part-time Professor in Loyola University’s Department of Theology. The facilitator was Rev. Tom Capo, minister of the DuPage Unitarian Universalist congregation, whose prior work in Iowa served on the Cedar Rapids Civil Rights Commission, the Inter-Religious Council of Linn County and the Sexual Health Alliance of Linn and Johnson County. Between the three of us, the evening’s event gave ample opportunity to start new dialogues between communities that don’t always have the opportunity, or even the tendency to want to work together. It gave us an opportunity to be frank and honest with each other, to be genuine, but at the same time to provide a medium that would prompt further questions and dialogue from people, long after the event was over. 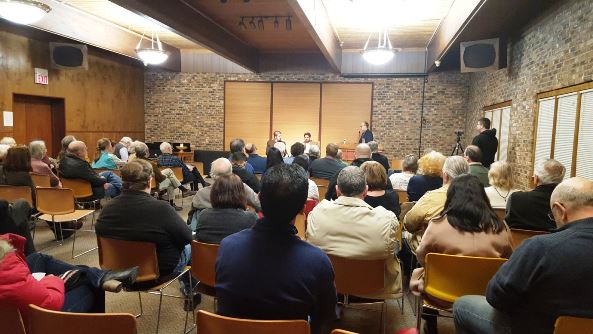 Prof. Cracknell taught me that dialogue begins when people meet each other on terms that encourage mutual trust and understanding. The Dublin-born, Irish comedian Dave Allen used to joke that, “Religion, really, is like life in that it’s funny when you least expect it. It also goes to prove that death is also like religion: it’s alright to laugh at it, as long as it’s not your own.” One thing that I noticed was that not everyone came to hear an open dialogue, as some appeared to expect a confrontation, especially when it came to the issue of free speech and criticizing religious or non-religious beliefs. There were occasions when Dr. Nizamuddin responded to some open criticism with logic, historical fact and reasons (such as remarking that he believed there were certain aspects of the Qur’an that have limited relevance in our modern world), that some people became aggressive towards his explanations. Substitute the word “religion” for “sincerely-held belief” and I think that Allen’s joke makes sense.

To close the dialogue, Rev. Capo read from Dr. Martin Luther King, Jr’s writings and encouraged all who attended to recognize that there will always be room for further questions should people wish to continue this dialogue, but that he was pleased that a new dialogue had begun. Rev. Capo also acknowledged that the event only scratched the surface of much-needed deeper discussions in an effort to understand the differences that were represented, which he hoped would help eliminate the bigotry and misunderstandings that were directed from the majority population towards both Muslims and non-theists.

The Chicago CoR event brought back a vivid recollection about something that Prof. Cracknell divulged to me outside of class one day. “UnitedCoR’s Executive Director, when I left to work in Africa many years ago, I felt that it was my responsibility to bring life’s answers to those people. It didn’t take long for me to recognize that, from the way they lived and worked with others, it was I who needed to learn from them.” I have had the fortune of travelling to many countries during my career in education, and because of these travels, I’ve had the opportunity to experience how religion and culture can become intertwined in ways that aren’t reported in books or the media. The way that Islam is practiced in certain parts of the Middle East is very different when compared to America, or Malaysia or even China. Likewise, Christianity or even atheism takes on different cultural characteristics in other parts of the world, taking into consideration the social and historical context of the area. I realize that in today’s information age where attention spans are the battlefields of often-competing agendas, it’s seemingly difficult to slow down long enough to probe, ask questions, read, clarify and then make informed and non-emotional decisions.

I will be the first to admit that inter-religious dialogue is something that not everyone immediately feels comfortable with, as there are conflicting opinions as to its efficacy, or others who claim that “A meaningful dialogue is only possible when people have a deep conviction that their faith has something to offer to the wider society in which they live.” Though non-theists wouldn’t describe their beliefs and values as “faith,” we would describe our values, thoughts and ethics as sincere and personal, and as such, should be represented and respected rather than discounted for lack of divine underpinning. It is by the act of dialoguing, listening, exchanging ideas and finding common ground that provides an opportunity to eventually open up the possibilities of reasoned alternative opinions. Five years ago, Chris Stedman described a victory from his work as an atheist participant in inter-religious dialogue, as he felt that the dialogue encouraged others to call into question policies and rhetoric that would seek to exclude rather than include non-theistic communities. As a result of the Chicago event, and with the help of materials provided by Humanist Society board member Howard Katz, I felt that Dr. Nizamuddin had the chance to learn about non-theists from non-theists rather than how we are often portrayed in the media. Dr. Nizamuddin’s comment, “I’ve never really personally met people who openly call themselves humanists” has provided a new opportunity to “share in the service to the community” as Prof. Cracknell encouraged. Even though we departed the dialogue with differences regarding many issues, we left as friends and community partners who now have more understanding of each other’s beliefs. It’s my hope that with further dialogues in Chicago, the seeds of our understanding will continue to grow.