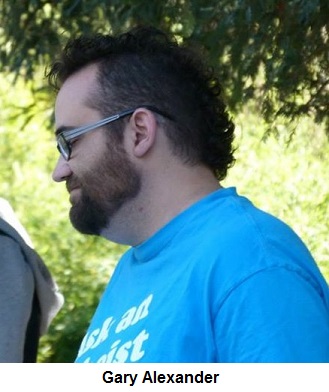 I had the privilege of hearing Gary Alexander speak at this year’s Sacramento Freethought Day leadership event. Gary’s training session was well received, and as it is something new to some nontheistic communities, people were continuing to talk about his session even until the late hours of the night.

Perhaps the reason for all the extended discussion on Gary’s training sessions was because of the nature of his topic: interfaith dialogue. We can imagine that some nontheists would wonder what would be the point with discussing matters of religion—or faith—with religious believers. Yet, Gary gave an impelling presentation that showed how the work that he and his colleague, John Keese, are doing has been dissolving barriers and misunderstandings erected by religious believers towards atheists. Gary also introduced UnitedCoR to John via email and the two of them agreed to talk about this unique outreach that they do.

Gary Alexander is a board member for the Sacramento Reason Center, a Chapter Founding Member of the Greater Sacramento Chapter of the Freedom From Religion Foundation, and an organizer for Sacramento Freethinkers, Atheists, Nonbelievers (SacFAN). He has also helped lobby with the Secular Coalition for California.

John Keese is a Secular Humanist who has Christian roots in several denominations. His background is as a lab technician and a school teacher. John’s also a book guru, an RPG enthusiast and has aspirations to become a secular author.

UnitedCoR’s Education Officer and National Coordinator: What inspired you to work with people from other religions in interfaith dialogue?

Gary Alexander: There are several answers I can give for this. To name the three most important reasons for me: First, it helps fight tribalism. Second—for actual philosophical progress—we need to challenge our beliefs, as surrounding ourselves with only those who echo our opinion leaves little room for us to grow. Third, our group creates a safe space to talk about something that is normally considered taboo to discuss.

John Keese: There are too many factors for me to name. Ultimately, it comes down to seeking positive change in a community, and it has been my experience that working with people achieves more than working against them. One thought behind the endeavor is, “If it’s impolite to talk about religion and politics, then how do polite people learn how to talk about religion and politics?” We foster an atmosphere where it’s safe to express conflicting views, at least on religion. Besides, there are the benefits of breaking down “echo chambers,” understanding alternate worldviews, and reflecting on the grounding and traction of one’s own views. I see all of these as key for the world to improve and progress. That said, the most inspiration I’ve had has come after the fact from having witnessed it take place.

SC: What do you believe is the most valuable outcome for having nontheistic people such as atheists and humanists on interfaith dialogue committees?

GA: Since we are the minority, and a minority with a terrible reputation in the minds of some theistic groups, this activity demonstrates that the misconceived reputation is invalid. This approach allows us to show theistic people that we aren’t trying to argue or condescend at every opportunity.

JK: Nontheistic people have views about “faith,” and topics that others link to faith. Since we form a larger portion of the population than many of the religions on such interfaith dialogue committees, it seems natural we should be involved. Yet, we usually aren’t involved; sometimes we aren’t even invited. Instead, nontheists get silenced, even straw manned on a consistent basis. Being heard and overcoming the negative caricatures would be major steps.

On top of that, I feel secularism and humanism have much to contribute, especially when it comes to developing common ground, to finding and fostering universal values in our pluralistic world. Secular Humanism overlaps with most people’s values (albeit not their supernatural beliefs), and some nontheists know what it’s like be religious, having been so one time in their lives.

SC: What has been your most memorable achievement working with interfaith dialogue?

GA: Every time we’ve ended one of our group sessions, we’ve had people who were not ready to end the conversation. They want to keep talking. I think that the fact that there are some who are still hungry for this deep conversation after we provide a taste is the most memorable aspect of the meetings to me.

JK: Curing hate and fostering understanding. Every session, I have received thanks for either or both.  It’s my main reward.

SC: In your “7 Holy Tips,” you mention, “Don’t assume you are morally better, happier, or smarter than the person on the other side of the belief spectrum.” Why is this so important? Could you give an example of when this tip was crucial?

GA: In my experience, when one person starts from a position of superiority, the other person will be less receptive to the message. We tend to have a social self defense mechanism where we put up barriers when someone condescends to us. Also, our reputation as New Atheists has been described as arrogant.

JK: Multiple studies have shown that those who feel they are superior have poorer listening skills, which would naturally hinder productive discussion. Given the touchy nature of our subject matter (morality, ethics and personal beliefs), this tip is perpetually crucial. Thankfully, we haven’t had to drum in the point, as nobody’s tried to take up a soapbox in our meetings. Back in our initial meeting, I think the first point I made was, “No matter your views on religion, most of the world thinks you’re wrong.” I think that helped set the tone that a measure of humility is warranted as none of our views have swayed the majority.

SC: For other groups around the US who might want to join local interfaith dialogue, what suggestions would you give them to help make their efforts a success?

GA: This question is best answered by John, since he did the majority of the work to get our group off the ground.

JK: Reach across the belief spectrum as far as you’re able. Mix up the presenters.  Run ideas past those with opposing views before a session:

Establish vocabulary for the discussion topic beforehand, even if it’s just to acknowledge the different meanings different groups use. If any other misunderstandings are expected, nip those in the bud too, i.e. fallacies that often arise with your topic.