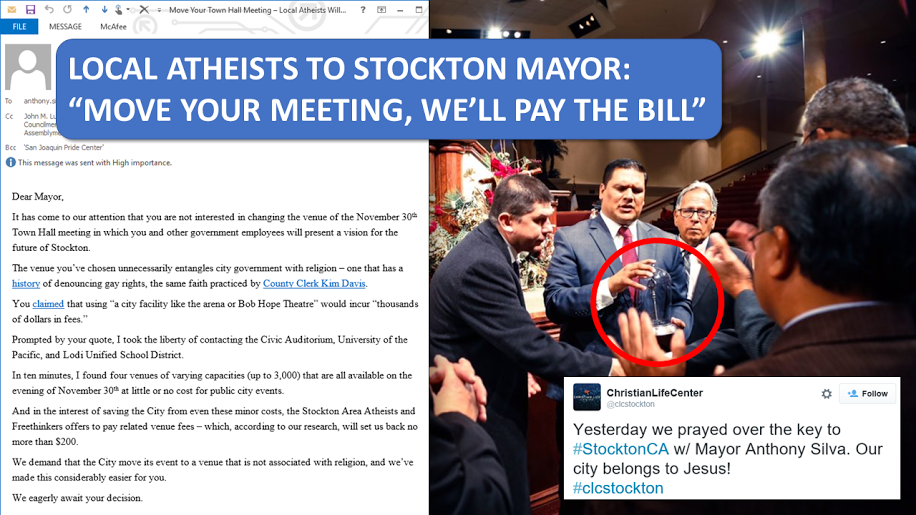 When Mayor Anthony Silva suggested that the sole reason for planning a Town Hall meeting at a church was to save the city money, local atheists questioned his motives. Just a week earlier, the Mayor used his official capacity to promote a “Town Hall Meeting” at Christian Life Center (CLC) church to be held the evening of November 30, 2015. Three days following that announcement, Silva held a 12-hour prayer rally in which he presented a “Key to the City” to God – a key that is now located at CLC church.

Silva’s actions prompted the Stockton Area Atheists and Freethinkers to contact the American Humanist Association, who in turn sent a letter to the City, demanding they uphold the Constitution and move the Town Hall Meeting to a secular venue. During a recent interview, Mayor Silva defended the religious venue: If I used a city facility like the arena or Bob Hope Theatre, I would need to pay thousands of dollars in fees.”

This prompted local atheist group organizer, David Diskin – who has worked and volunteered in Stockton for twenty years – to make some phone calls. Spending no more than ten minutes on the phone, Diskin found four venues that the City could affordably use. University of the Pacific offered Faye Spanos Center (capacity 872), which has been used for a similar Town Hall when Jerry McNerney needed space. The venue would cost the City less than $200, only to cover employee expenses, pending the President’s approval. A call placed to Lodi Unified School District confirmed two venues: Bear Creek High School’s Multipurpose Room (capacity 483) and McNair High School’s Multipurpose Room (capacity 978). Additionally, both schools’ gyms could have also been candidates (capacity 1,933 and 2,675, respectively) if more notice was given. The cost to the city: just $32/hr.

But the real surprise came when a representative from the Civic Auditorium returned Diskin’s call. The venue, which seats 3,000, is owned by the City and available for official City use at no cost. Somehow, the Mayor overlooked a venue that tax payers had already paid for and would be perfect for such an event. All three venues are currently available the evening of November 30th and have offered to host the event.

The email promoting the event, sent from “Mayor Anthony Silva” promotes a “Mayor’s Town Hall Meeting” hosted by Christian Life Center to “learn about what is happening in our City” and to discuss Stockton’s future. Speakers at the event include Silva, Vice Mayor Fugazi, and representatives from Stockton’s Police and Fire Departments and four school districts. The flyer, sent with the email, includes a seal with the words “Office of the Mayor.” The event on Facebook (with over 300 either interested or planning to attend) has been promoted by the official Mayor of Stockton’s page on Facebook.

The promotion of the event, and its speakers, make it clear that this is not an event hosted by a private citizen, but by the City of Stockton and its employees. Diskin writes, “To hold such an event at a megachurch, when so many great alternatives are available – at no cost, or nearly free – is an insult to everyone in Stockton who does not follow CLC’s specific brand of Christianity.”

The Christian Life Center church practices Oneness Pentecostalism, and requires its members and students to participate in a water baptism before speaking in “tongues under the inspiration of the Holy Spirit,” and adhere to strict “holiness standards” that govern their apparel. Famed county clerk Kim Davis, who denied marriage licenses to gay couples, is a member of the same denomination.

In April, the CLC church in Stockton asked its members to speak out against marriage equality, calling for “righteousness to prevail.” The atheist group, a supporter of LGBTQ rights, cannot fathom how such a venue could be considered for a community event.

Nicholas Hatten, executive director of the San Joaquin Pride Center is disappointed, commenting, “Following previous incidents involving Vice Mayor Fugazi and Pastor and Lieutenant Wills, why would the City congregate for official city business at a place where our LGBT citizens would not feel welcome?”

In another interview, Silva stated: “If I would have scheduled it at a high school, someone who likes charter schools over public schools might have said they don’t feel welcome there because I don’t believe in public schools.” Diskin adds, “His excuses don’t add up. Silva should be proud of Stockton’s fine venues, especially those already paid for by our tax dollars. The City needs to move the event, and Stocktonians should be alarmed that their Mayor appears more interested in promoting Oneness Pentecostalism than its own Civic Auditorium.”

In an email sent to the Mayor, the Stockton Area Atheists and Freethinkers have even offered to pay any venue fees, should a public high school or University of the Pacific be chosen instead of the Civic. The group, founded in 2009 by local residents, represents over 500 non-believers in the greater Stockton area. It provides a community for those who identify as non-religious, and focuses on community involvement, social events, education, and activism. Monthly events include game nights, brunches, dinners, a book club, and secular family days.

The 2014 Religious Landscape Study reported that 11% of U.S. adults say they “do not believe in God”.