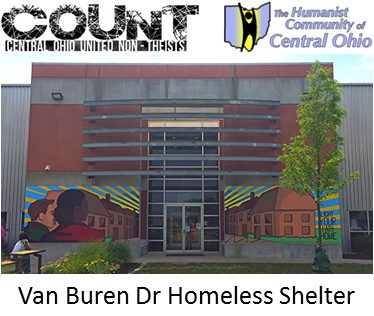 Due to several schedule conflicts the Van Buren Drive homeless shelter has re-scheduled 2018 COUNT/HCCO shelter events to 3rd (instead of 2nd) Tuesdays in February, March, April, June, October and December. Events in January, May, July, August and November in 2018 remain on 2nd Tuesdays.

Central Ohio United Non-Theists (COUNT) and HCCO, both Gold/level 3 Beyond Belief Network (BBN) teams for 2016 and 2017, and the Secular Student Alliance (SSA) at The Ohio State University (OSU), September 2017 BBN Team of the Month, have together worked a total of 778.5 hours at 36 events held January, 2015 through December, 2017. 14 of 78 total participants from Columbus CoR groups have worked have worked there at least five times and have been designated as “Handful” volunteers.

COUNT and HCCO also collaborate on Columbus CoR Bleed-N-Feed events where Red Cross blood donation is followed by dinner at a nearby restaurant. RSVP with HCCO or COUNT for January 18th. We will also donate on March 15th and May 17th (third Thursdays every other month).

HCCO, COUNT, OA, and SSA at OSU are members of the Columbus Coalition of Reason.