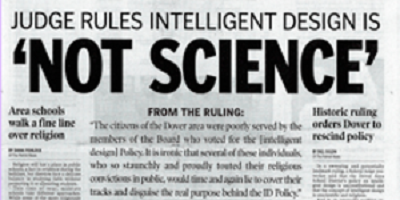 On Sunday, December 6, 2015 The Freethought Society will co-sponsor a very special event with the Ethical Humanist Society of Philadelphia (EHSP) and the Delaware Valley Chapter of Americans United for Separation of Church and State to mark the 10th anniversary of the “Intelligent Design” court case of Tammy Kitzmiller, et al. v. Dover Area School District, et al. (400 F. Supp. 2d 707, Docket No. 4cv2688). The 2015 EHSP/Freethought Society Tree of Knowledge will be decorated after the platform speech and everyone is invited to participate. There will be music, singing, and books to purchase from authors.

WHO:
Speakers for the event are:
– Margaret Downey, President of The Freethought Society.
– Hugh Taft-Morales, Leader of the Ethical Humanist Society of Philadelphia.
– Janice Rael, Founder and President of the Delaware Chapter of Americans United for the Separation of Church and State
– Eric Rothschild, Partner of Pepper Hamilton, LLP.
– Laurie Lebo, the journalist who covered the trial in Dover, PA.
– Hedya Aryani, Associate of Pepper Hamilton, LLP.

WHY:
This event is intended to celebrate the legal victory from 2005 when the U.S. Federal Court system responded favourably to a direct challenge over school districts teaching “intelligent design” in public school district classes. The event also celebrates the Federal judge’s ruling that the school district’s required “explanation of the origin of life that differs from Darwin’s view” was unacceptable.

MORE INFORMATION:
Tickets for the event can be purchased at: http://www.eventbrite.com/e/10th-anniversary-of-kitzmiller-vs-dover-case-w-tree-of-knowledge-ceremony-tickets-17731145333.

The Ethical Humanist Society of Philadelphia (EHSP) at www.phillyethics.org is a fellowship of individuals and families; an Ethical Humanist religious community. The EHSP celebrates and supports each other, enjoys working together and views the personal growth of each member as its primary concern. Instead of attempting to escape today’s problems through the empty promises of material success and other-worldly religions, the EHSP looks for meaning through creative actions. We can enrich our own lives by improving relationships within our families, among our friends, at the workplace and in the community. Its programs reflect a belief in the individual’s capacity to make a difference.